We got back from CeBIT late wednesday night to drop off our printer to find that our servos had arrived from overseas! This is what our pile of 60 servos looks like: 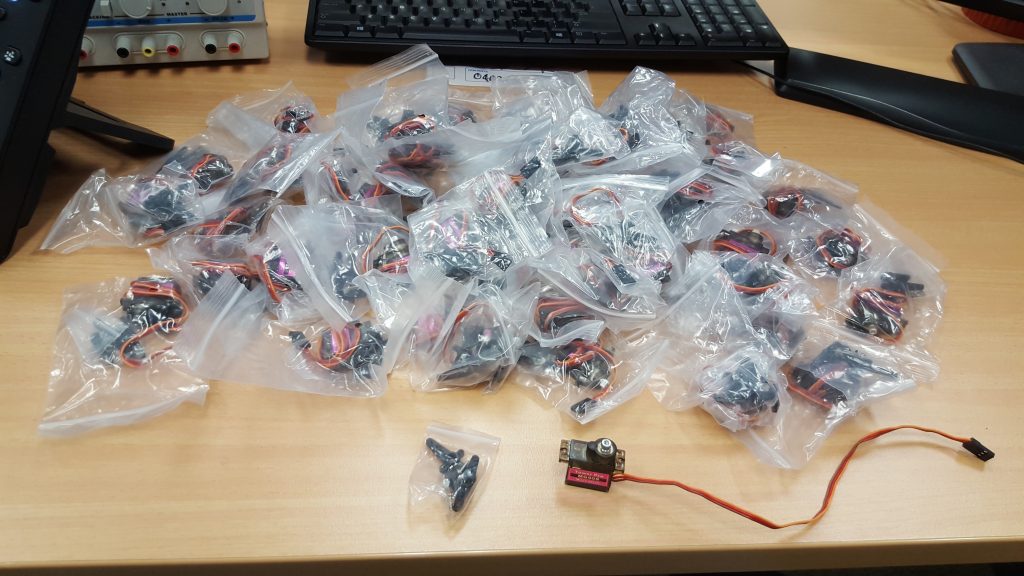 This will allow us to keep working on our early prototyping for our loom actuation system to keep us on track for having our first production loom ready for the end of the year.

For the end of the year our pile of servos will be 10x the size so that’ll make for an interesting photo to share with you all! 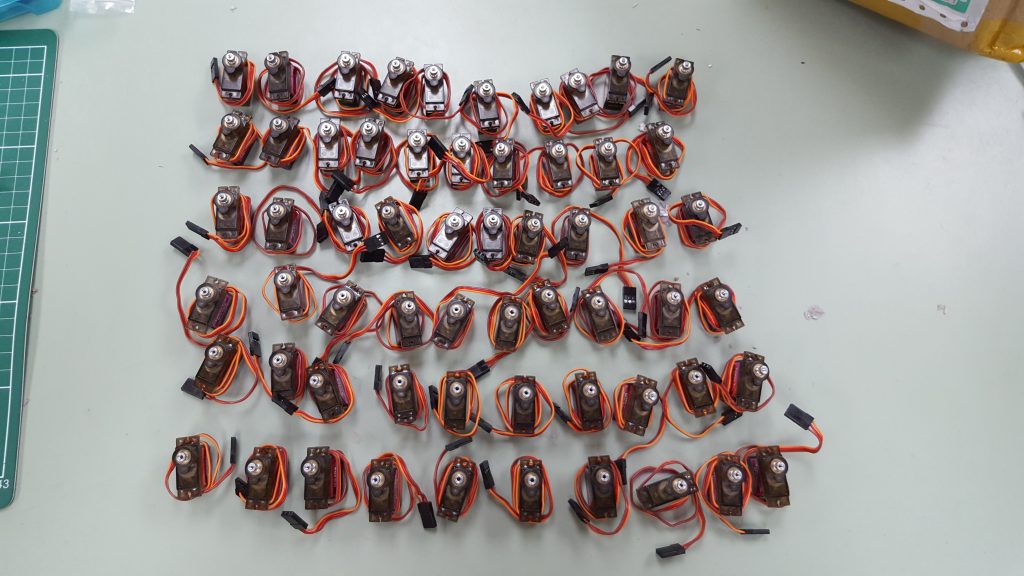 We settled on the Tower MG90S for our first moderate scale trials. It’s a relatively cheap digital servo with metal gears so we figure that’s a good place to start. Our mechanism prototype will show us how well it’ll last with constant loading. Metal gears are far stronger than their nylon brethren but they tend to fail a lot more dramatically. Hopefully we don’t burn through too many of them during our tests though if we’re having a bad day we might just have to make an interesting youtube video of purposely failing a servo … for science.

With a quoted stall torque around 2kg.cm (or roughly 0.20 N.m) of torque, it should be more than enough to move the heddles up and down. With some quick maths, if our arm will be 50mm long so that means ignoring friction we can deal with 0.4N of load or 40g which will be fine for what we’re doing.

Our 32 channel servo controllers for testing mechanisms on our loom have arrived from ElecHouse. They even upgraded our shipping to a faster option free of charge! We were a bit unsure about what was going on with shipping when they cancelled the first shipping reference number but they responded promptly when I contacted them. So props to the ElecHouse team for being awesome.

Check out the product page here with links to the datasheet / software. 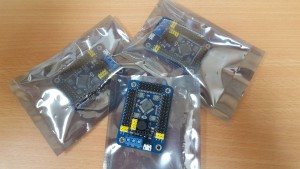 The documentation is of the usual sort of standard you'll get from a chinese PCB/ controller manufacturer but it's fairly exhaustive and clear how to use it. If we run into any issues with the documentation we'll write our own documentation for it so if you have any questions please feel free to ask and we'll help if we can.

Given that there are going to be 500 threads on our mark 1 loom, we will need to run 16 controllers each controlling 32 servos. The controllers allow us to provide power separately for the servos which is handy given that if all the servos are active the total power might be a bit higher than what USB can provide. It will also let us tweak the supplied voltage and potentially monitor the current/ voltage supplied for a bit of monitoring action.

We're planning on using a raspberry Pi we have lying around to drive some or all of the controllers depending on how we go with USB/ serial device limits.

If you're interested, I'm also working on a standard control file (think GCODE for weaving) that is here on google drive.

There is still a long way to go for our first prototype but the pieces are starting to come together! I'd love to hear your comments or feedback as we move along.